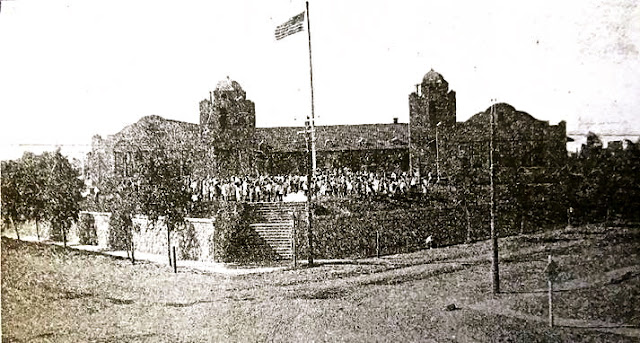 My husband, Mike, sent me this 1952 photo of the old 2nd Avenue grade school. Someone in his office found it and passed it along for me. Fire Station One stands there right now, with the new Fire Station One construction behind it. The walls are still there, and most/some of those blocks will be incorporated into the memorial wall. You might be able to see that there are poles near the curbs in the streets. Could they be parking meters? The photo was too grainy to know for sure, but isn't it fun to take a peek into the past?
Posted by Debra Erfert at 3:59 PM No comments: 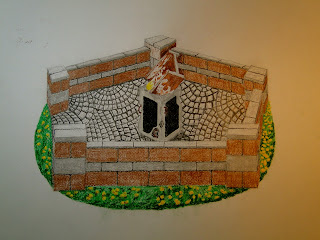 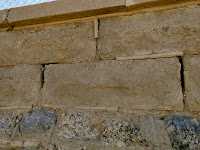 A building in progress 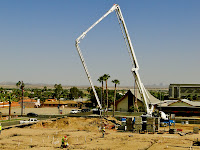 This is a picture of the land behind Yuma Fire Station #1 about two weeks after the groundbreaking ceremony. Huge tractors and earth moving machines ate away tons of dirt, while big water trucks sprinkled continuously across their work to keep dust down to a minimum. My dutiful husband climbs up on the fire station’s roof twice a week or so to take pictures of the progress, not only for posterity, but to keep me happy. I’m afraid of heights. I climbed up on that roof just once—and that was more than enough for me, thank you very much! 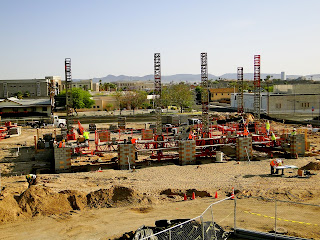 As you can see in this last picture, there are pillars being built. They have something to do with the building's footings. I saw the rendering a couple of weeks ago when I went to my husband's office at city hall. It will be a very pretty building--when it's done. I believe it's on schedule.
Posted by Debra Erfert at 5:10 PM 3 comments: 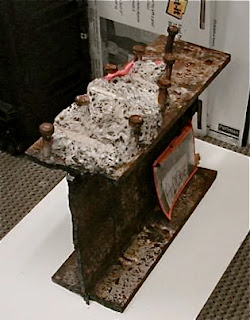 Back in the middle of 2011, the City of Yuma Fire Chief Jack McArthur was able to secure our department a piece of history. This 24 inch by 9 inch by 18 inch remnant I-beam artifact of the Twin Tower will be the centerpiece of a memorial dedicated for those emergency responders who lost their lives September 11, 2001.

What is an artifact? They could be personal items found in the rubble, or parts of a destroyed building. In our picture is a small piece of a structural I-beam. There are indentations in the residual concrete where other steel crossbeams rested against it. Were they placed there before or after it fell, that may never be known for certain. There are other artifacts that have been shipped across the country and around the world by the New Jersey Port Authority, to be put on display in museums or at fire departments as a reminder of that tragic day, things like a burned out ambulance, a crushed Port Authority Police car . . . a badge.

The memorial will be built after the completion of Fire Station 1, in November of 2012.

Sketches of the memorial design are underway. As soon as they are approved, I'll upload them and you can see what will be coming for our artifact. When it's completed, the memorial will be open for those who wish to visit and reflect.

We will never forget! 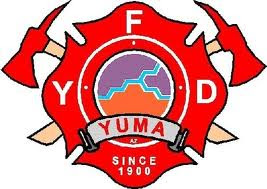 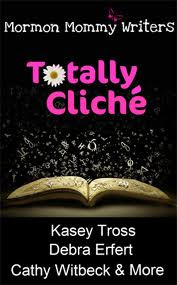